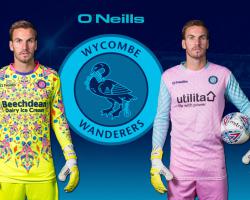 A yellow kit has a multi-coloured kaleidoscope pattern on the front, which resembles a target to aim for - rather than the goal

Drawn up with the Chairboys' official kit supplier O'Neills, the kits aim to make the goalkeeper appear larger and more imposing

Wanderers coach Barry Richardson, who is the club's second-choice goalkeeper, said: "There has been a lot of research into the science behind goalkeeper kits, which is why you see a lot of luminous colours and chevron patterns which enlarge the presence of the keeper in the goal.

"We've developed that idea over the past couple of years, with a bright lime and green design last year, and have enjoyed working with O'Neills to come up with these designs which we hope will be effective on the pitch and also be popular for fans who'd like to buy the replica versions."